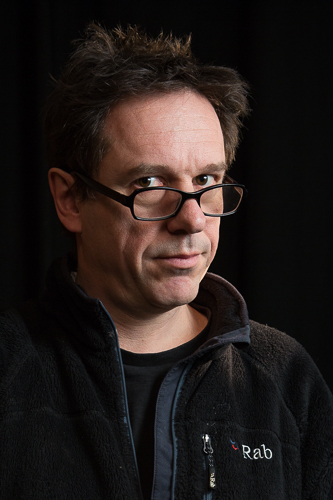 Nik Palmer is the son of Ray and Joan DaSilva, founders of the Norwich Puppet Theatre, and the DaSilva Puppets. He started playing with puppets at a very young age and is now a multi award winning puppeteer.
Nik worked at the Norwich Puppet Theatre for a number of years then, after a short spell at Lecoq mime school, formed the Parachute Theatre Company which, for 20 years, delivered innovative puppet shows and large scale community projects.
Nik uses his talents for Noisy Oyster as designer, maker, composer, musician, photographer, website builder and all round clever dick.

Find out more about the DaSilva Puppets here.

Sarah Rowland-Barker always had an eye for good looking boys, thats how she ended up with Nik.
Sarah has been performing and leading workshops for over 25 years. Sarah attained an MBBO in classical dance, then went on to obtain a degree in dance and psychology. After further training at the National Centre for Circus Skills and Performing Arts, Sarah went on to work in theatre, street performance, television and to tour with Snapdragon Circus and No Fit State Circus.

Since forming Noisy Oyster in 2006, Nik and Sarah have devised and performed a number of puppet productions in a variety of styles which they have toured extensively to theatres and festivals and on a regular basis at popular holiday destination, Center Parcs. In 2009 Noisy Oyster were commissioned by the Bristol City Museum to devise and perform a Chinese shadow puppet show - Monkey. And over the last three years the company have been gaining international acclaim with Plain Bob, performing in the Czech Republic, Austria, Romania, Spain, Denmark, Bosnia, Thailand, Mexico, South Korea, Colombia, Vietnam ( where Nik was also a judge) and Indonesia, where they won Best Street Show at the World Puppet Carnival, and were nominated for the Best Children's Show.